Those Schombourg Dragoons (or - the Dragons de Saxe!) 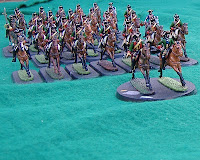 Well, here they are, the Schombourg Dragoons, 17th in order of precedence after the Seven Years' War. Figures are complete, barring terraining the bases and providing a standard. 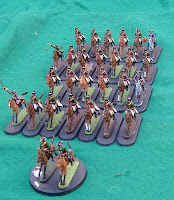 Advancing here as they are in column of troops rather than as by lines of Squadrons as is the case below, you'll notice they are are all RSMs with a line cavalryman standing in for a Cornet.

I have included a pair of trumpeters as ordinary troopers as the standard "Grant" organisation makes comparatively little allowance for command figures, a feature of the "Young-Lawford" organisations that I've always greatly enjoyed. 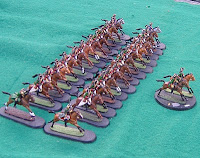 Squadron commanders are keeping a careful eye on the alignment of their troopers.

I'm thinking seriously of painting some of the lovely RSM cossacks in similarly coloured uniforms and brigading them together to make a version of the Legion de Saxe; or a Legion de Horne as the mood takes me together with some fusiliers, a few grenadiers and a gun or two were I to fall into "imagination" mode. Certainly reading my copy of Wargaming in History has piqued my interest in that direction.

I may have mentioned already, but I expect sufficent deliveries in the next week or two to let me finish off La Reine and Royal Pologne in pretty short order. In the meantime I am painting up figures to complete the first squadron of the Royal-Cravattes.

Got any old RSM Cavalry you no longer want or need? Drop me a line at bloggeratorATgmailDOTcom.
Posted by Bloggerator at 3:25 PM 6 comments:

Very good, Greg, but what does it mean?

Glad you asked - in concrete terms, it means I have finished the Schombourg/Saxe Dragoons (bar the colour), and the first squadrons of La Reine, Royal Pologne, Montcalm and the Turpin Hussars.

I am within spitting distance of completing second squadrons of La Reine and Royal Pologne (just waiting on the next order from DPC) and I ought to be finished with the first squadrons of the Cuirassiers du Roi and the Royal Cravattes by the end of the month.

Pictures when I get time this weekend.
Posted by Bloggerator at 3:40 PM 3 comments: