With the Gatling battery and it's merry crew all painted, it was time for the infantry to get some love so I returned to the Buffs who just needed seven more figures to finish them off. 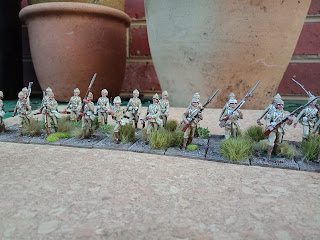 So, with no further ado, here they are sitting on the potting table in the last of the winter sun for the day.

I am not sure if I had gotten up a picture of one of the command staff - he may be Major Pettigrew, he may not, but here he is with his eager ADC. 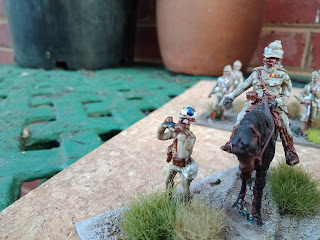 I am not completely sure, but i think that the next part of the project may be to get through the Highland Light Infantry.
Posted by Bloggerator at 6:11 PM 2 comments: 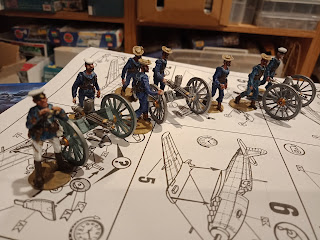 Forgive the picture quality. Was done in the shed under artificial light very early in the morning! 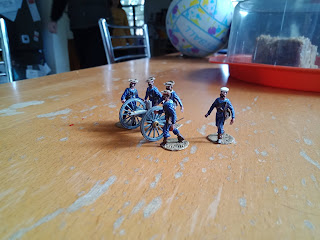 As you are doubtless aware, the Willie Ranges include a few artillery pieces.

Among them are a Gatling gun with an army crew.

I wanted a navy crew and there are a couple of sailors in the "Farewell Dolly Gray" range - an Officer and a marching rating. I hoped the rating might be a fairly versatile figure I could animate into a few different attitudes with the odd arm bend and turn of the head. Well, the figures arrived in the post this week. I was pretty happy with the rating - he marches, open handed. His rifle could equally be at the trail or in the slope arms pose. So, plenty of potential there. His sennett hat is not really attached to anything other than the crown of his head, so it's quite easy to snip away the brim and drop a blob of greenstuff on top to make a sailor hat. That same lack of attachment makes it easy to gently twist his head gently left or right.

Among the gunners that come with the Gatlings is a nice officer with field glasses who is getting a head transplant so that he may wear a peaked cap instead of a sun helmet. 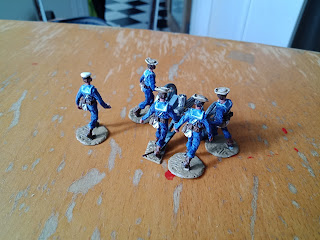 The army crew will not be wasted. The "gunners" are infantry castings that are intended to be judiciously posed about a gun - yes there is one specialised figure in terms of a seated gunner, but I have plans for him and a 4Ground Wagon. His mates will either join the infantry or be used to crew some Connoisseur Field Guns.

One down, two to go.

PS - of course I am now buzzing with possibility. How about a crew for a Boer War 4.7"? I have the guns already... Or a couple of gunners for a light piece mounted hastily in a steamer? Officers to fit the wheelhouse of the HMS Implausible?  A handful of deck-hands. A small Naval Brigade?
Posted by Bloggerator at 3:02 PM 4 comments: