Having nothing better to do this weekend, I dug out and rehabilitated some old, poorly painted British Light Infantry for the Fort Niagara Campaign.

They are the ever-reliable RSMs, straight out of the relevant Blanford and lovely to paint. I decided to do a representative few from each of the light companies present at la Belle Famille. The sharp eyed among you will notice that the pants on a couple of the figures are white. I was looking for a means of adding a bit more variety to the very-similarly uniformed troopers and remembered the 44th wore white small-clothes in their fatal encounter on the Monongahela, ans so it went. I'll be repeating this experiment on their cousins in the Line companies as well to difference them from the men of the 46th.

Note the unit designations on the back of the bases.
I'll try to have a little skirmish game soon to try out the Drums of War rules.

Posted by Bloggerator at 5:29 PM 2 comments:

It's quite an unusual fortification for the French and Indian War. Most of the larger forts that the French built were more like that at Ticonderoga/Carillon, being basically a square plan with a bastion at each corner. A ravelin might cover a gate or push the defences deeper out into the surrounding terrain.

Niagara was a rather different story. Originally a rather dilapidated wooden stockade surrounding a few buildings, the French engineer Pouchot decided that he would wall in the point on which the fort would sit. That original trace may be observed in the fort today.

He built what is basically a crown-work of two demi-bastions connected by a curtain, with a large bastion covering the gate. The bastion stood in a ditch, but the lunettes either side of it that supported the covered way stood on the salient places d'armes, proud of the ditch. On closely examining the diagram and the cross-sections, it also seems to me that a shallow ditch was excavated in front of these as well, but that it was not part of the main ditch.

Much of the work was built of material excavated (as can be seen in the cross-sections in the image above) from the ditch. Obviously, the forts defences are oriented eastwards as that was the most likely avenue of attack, although the northern and southen walls were fortified to a degree with retrenchments and stakes.

The fort had two major short-comings.

The first was that it's guns were mounted to fire "en barbette" or straight over the parapets which offered the gunners little cover as the British advanced their saps. This was largely overcome by building merlons from sand-bags.

The other was that there were no bomb-proof shelters for the troops, and thus the garrison suffered quite a few caualies from British mortar bombs and also became progressively exhausted due to not being able to rest.

I'll be using this illustration and others I have to start planning my own model of the fort in coming weeks and months, so watch this space.
Posted by Bloggerator at 10:34 AM 4 comments:

This weekend I was lucky to have some time to myself, so I dug out some old RSM Indians and Militia who had been sitting in a box for a very long time; more than five years, if I'm right. I think these are such beautifully designed figures that I am really looking forward to painting the 80 or 90 more I'll need for the Fort Niagara campaign. They are so easy to paint that I got through ten of them in an evening.

These Indians have been based to my usual "skirmish" standard - induviduals on 25mm bases, or groups of two on 50mm bases. They make for a suitably scattered and irregular grouping - just what every war-band needs.

There is an indian firing a musket who is dressed in full buck-skins and standing ine middle of the formation who is I think, the first wargaming figure I ever painted.
Some projects are longer in the gestation than others!

Militia; I'm not too sure whose side they are on. I note the figure on the far left may be a coureur du bois due to his little cap, so I am guessing French..? I am pretty sure the militia in hunting shirts are probably meant to be Americans rather than Canadians, though. Who knows? Perhaps they are all simply "frontiersmen".

Another view of the Militia. They are not such impressive figures straight out of the bag, but they paint nicely; not much more than successive layers of lighter and lighter dry brushing with a little layering-on of the final highlight, all followed with a wash of sepia ink.
In other news, work on the Victorian Navy continues in a satisfactoy way.
Posted by Bloggerator at 10:37 AM 2 comments:

In the Grim Darkness of the 41st Milennium... 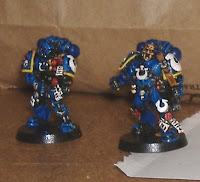 No wonder these guys look peeved.

What, they ask, about social policy? Housing? Rental support? Gays in the Military? Legalising Black Lotus?

Two of the most fiddly miniatures I've ever painted, I'd think, especially after someone* dropped a load of orange-juice over them!

These are veterans of the Tyranid War. They look jolly tough. I'm thinking of sprinkling a few of them among my tactical squads.

According to the new Codex Space Marines fluff, as Ultramarines they are the best marines ever and no-one can kill them and all other Space Marines wish they were Ultramarines, too. And the Index Astartes (which all Marines should be following - otherwise they are not allowed to game in the Emperor's stores) was written by their Primarch who was apparrently such a strategical genius that he managed to be far from the centre of the action during the Horus Heresy. That's how good he was!**

*You know who you are.
**Tongue firmly in cheek.
Posted by Bloggerator at 2:35 PM 4 comments:

Fort Niagra's only real hope was in relief from the Army of the Ohio which Captain Pouchot, the Fort Commandant had despatched to menace the western frontier of the British colonies.

Now summoned back, they made the epic journey back and entered into combat with a British force about half their size that had been detatched to contest the approach to the fort.

They met at la Belle Famille, virtually under the eyes of the besieged garrison.

The British began by despatching 50 light infantry each from the 44th, 46th and 4th\60th Regiments. These 150 soldiers built a log wall that they rather determinedly stuck behind throughout the battle that was to come!

A little later on they were reinforced by another 150 "hatmen" from the centre companies of the 44th, 46th and the converged New York Regiment.

Again later Lt Colonel Eyre Massey brought 140 hatmen from the 46th as well as 25 Grenadiers from the same regiments rather depleted Grenadier company.

Rushing up the portage road to meet them were Six Hundred Compagnies Franches de la Marine and Two Hundred Militia.

The French might have had 250 Indian allies with them but for the fact that British allied Indians had prevailed on them to declare their neutrality in the coming fight. The "British Indians" numbered around 310 and did not participate in the fight, but joined in the aftermath, killing the wounded, scalping the slain and pursuing the survivors.
Posted by Bloggerator at 5:12 PM 3 comments: