A Gazeteer of Imaginary Places

Taken from the Journal of an English Tourist who as he rambled from Spa to Spa across the Germanies chanced to find himself on our own dear Alzheim.

One enters the quaintly-named Duchy or Electorate of Alzheim from Bayern via a hitherto unknown minor range of mountains. I was fortunate indeed to find myself in the delightfully inconsequential spa town of Augusts-bad. This was especially fortunate as mine syphilitics were plaguing me dreadfully. As I took the waters (and the wines and the cheeses and indeed the hams) I learned that this hamlet was the creation of the current ruler Augustus II, by all account a lesser son of greater sires. Still quite a pretty little town.

After sojourning there a day or two past the grim fortress town of Rosenthal by road, crossing the Mur Flusse at it's junction with the Grossehaber Flusse, then south on the old Roman Road all the way to Waldau, a medium-sized market town that sits at the foot of the Great Escarpment. I must admit to being a little surprised at how unlike a savage rampart of cruel cliffs this is, being more in the nature of a series of gradually rising slopes and terraces. Experience is the great undoer of Fancy.

Still, we did not stay there for long, just a couple of evenings; long enough to sample the local delights before setting out along the steeply winding road to Gehrkevale, principal town of the Alzheim uplands.

Gehrkevale is the principal arsenal and factory of Alzheim, and a grim place for that. it's people are quite unlike any of the others of the country. They are small and neuraesthenic, nothing like the hardy mountaineers of the alpine counties or the bluff, hearty peasants of the northern plains. We did not dally long. The beer was sour, the sausages small and the women best left undescribed.

Wishing we had taken the road that follows the course of the escarpment, we descended with all decent rapidity to the Capital of Alz.

This modern city was laid out by the Great Duke (or Elector), the current rulers' great-grand-sire in the Year of our Lord 1642 on the ruins of the old city, so greviously sacked and burned by Bavarian and Imperial troops during the Thirty Years' War. The work of the father was continued by the son and grandson, and now the City has much of the air of Versailles as was the fashion at the time of the Sun King. Nor did these wise rulers neglect the defences of their Capital, being as it is fortified to the last degree possible of the Military Art.

In Alz may be had ever sophisticated Entertainment or Vice and we availed ourselves fully. Doctor Smith took it upon himself to pass beyond apres un excess des femmes. As one does.

I myself was again laid low after stubbing my toe by the sheer variety of my sexual diseases and thus feared to travel east to Grunwald. I feared the doubtless damp marshlands and gloomy, spirit-depressing, forests of the region (and it's mysterious southern counties of the Uckermark) would have had a fatal effect on myself and at least two other members of our party.

Perhaps instead we shall make out way further south to the Princes' little summer place in the south - Sans Souci, he calls it. Perhaps then onto the Italies?

The journal breaks off at this point not to be resumed. We can only wonder at the cause.
Posted by Bloggerator at 8:47 PM 4 comments:

The Military Geography of Alzheim

Alzheim is a medium sized, middle-ranking state in the middle of southern Germany.

It is approximately 400 kilometers along it's east-west axis and about 250 kilometres north to south.

To the west and south curve the mighty Alzgebirgs beyond which lie the realms of the Gallispania and of the Italians respectively. These are intersected by five mountain passes which the military geographer may divide into First, Second and Third Class roads. The first and second class roads are guarded by old fortresses that date back to the first half of the fifteenth century; the First class roads are guarded as at the town of Finke by latterly erected modern fortresses to M. Vauban's system of fortification. At the same time as these fortifications were built, the old forts on the secondary roads were graced with diverse outworks; Ravelins &c. 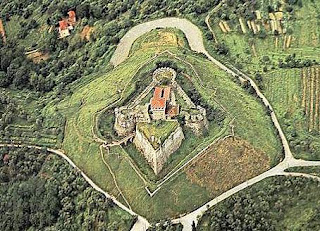 The old Fortress at Finke.
To the North and East run the gentle loops and meanderings of the Mur Flusse. This river's great flow is fed by tributary rivers arising in the Alzgebirgs, the Themse and Grossehaber. Paralleling their course, but not joining the system is the Isar which runs it's course to the south and east, creating the Waldsee and the marshy, forested country in the hills East of Grunwald. This swamp eventually finds it's way via a network of small lakes into the Neider Iser which gently waters the Uckermark in the South-East of the country.

These rivers are the highways of the country and so are guarded as potential invasion routes by the bluff-built fortress of Prenzlau which guards against the sundry Princes of the Germanies, the small fortress at Rosenthal (which watches the Bavarians) and those of Grunwald and Gunzbad which along with the Grunwald marshes are the Eastern bulwark in case the Empire should ever attempt to replicate the depredations of the Thirty Years' War.

The singular feature of Alzheim is the Great Escarpment which cuts across the South-western portion of the land. This is Alzheim's national redoubt, which, although not seriously fortified since Mediaeval times, has nonetheless been the refuge of the people as recently as the 30 Years' War when Bavarian and Imperial armies ravaged across the land. 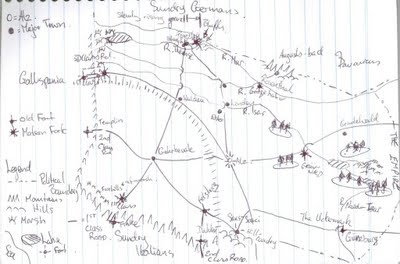 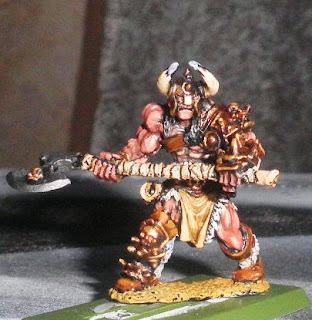 Reaper Miniatures barbarian-types. I think this one is meant to be evil... 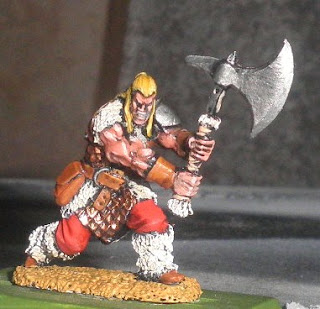 Never would have guessed it, would you?

These are examples of the black undercoat technique in all it's glory, usually with a base, mid and highlight colour. The skin on Mr Muscles up top has about six highlights on it, all very thin, to get the smoothest transition between highlights I could manage. Sepia ink glazes to tie the layering together.  Looking at them, I realise how much I owe Marvel Comics and Dark Horse (and Games Workshop) in the visualisation of these figures!
Posted by Bloggerator at 7:14 PM 2 comments:

Noodling about on the Net

As in the title, I was poking about on the internet and stumbled across this:

Which led me to the back of a 1985 issue of Marvel Comics "The Savage Sword of Conan" featuring on the back cover an advertisement for players to join the play by mail campaign "Hyborean War".  You could "Join the tens of thousands nationally who are enjoying the vivid interactive games only made possible in the last few years by recent advances in computer technology.

And then there is this:

And to think I was foolish enough to plan on working on some of my French cavalry and Anglo-Prussian infantry some time in the near future.

Help! I'm all over the place.
Posted by Bloggerator at 2:08 PM 3 comments: