A Few More Thoughts on Fortresses

With the basic shapes already created and with the easy-to-work-with nature of the materials, one could get quite elaborate with your fortress.

Consider this: If you have two demi-bastions, a bastion and two curtain walls, you have the makings of a crown-work. Two bastions and a curtain on their own make an acceptable horn-work, as well. These structures served to enclose detached suburbs, or extend the work deep into the countryside if needed.

Another feature that catches my eye would be to build a 'cavalier' or elevated battery inside a bastion, although I think I might have to re-build my bastions on a rather roomier basis.
Posted by Bloggerator at 2:05 PM No comments:

I'm at the slow bit now. I've clad the tops of all the polystyrene slabs with heavy card to give a nice flat surface to glue the parapets onto. I'm also going about cladding them in card "stone blocks". This is the really slow bit.

At the moment I'm working at the rate of getting one-and-a-bit slabs clad a day.

Pictures to follow soon.
Posted by Bloggerator at 8:04 AM No comments:

More Fortress than you could shake a stick at. 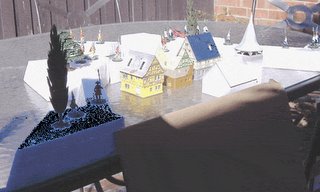 The basic structure is now complete but for two more ravelins.

I'm starting to think about doing a glacis. I could do it with a 15-20mm slab of polystyrene, not too wide, carved at a shallow angle. Where the pieces would meet could be done by 'eye' I think. Line the inside with bamboo skewers to make the palisade and that'd be about it.
Posted by Bloggerator at 10:35 AM 3 comments: 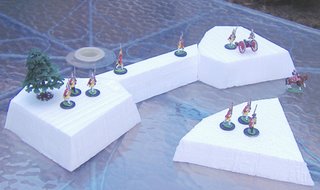 To round the basics out, I want to do another wall and another with a gateway. Additionally, I'll also do another two half-bastions to butt up against the table edges. Then I'll probably need two more ravelins.

For fun I'll do another wall, a ravelin and a bastion that have been breached.

Then there's the bridge I'll have to do to link one of the ravelins to the gate.

They'll all need parapets. I'll probably cut them from foam-core card as simple vertical parapets. The real things were very thick, with gun-ports cut in them, but in this scale I don't think it will matter too much. Besides, foam-core is a little too inarticulate a material to take that kind of detail, sadly.

Note the tree on one of the bastions. They used to grow them there so the roots would bind the earthern fabric of the bastion more closely together. Furthermore, the wood would furnish both fuel and the materials from which gun carriages could be manufactured.
Posted by Bloggerator at 4:57 PM No comments: 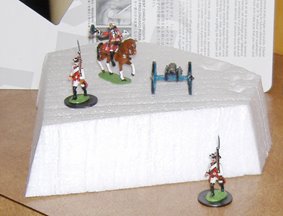 I bought a hot wire cutter today and used it to trim up some of my polystyrene hills for Blasthof. It was a novel experience, and one I haven't had since primary school.

Having been pondering fortress construction for a good few years I was amazed to turn out an entire bastion in about 30 minutes with the aid of a couple of templates.

I'll do another tomorrow and a ravelin as well.

My hot wire cutter is my best new friend.
Posted by Bloggerator at 10:51 PM No comments:

Here's a few early thoughts on terrain for the battle of Blasthof Heath.

The ground and the river will be green paper and blue cellophane held down with double-sided sticky-tape.

The plough will be corrugated cardboard covered patchily with sand and PVA and painted brown.

Blasthof Farm will be a Dapol thatched cotage I own.

The Blasthof Berg will simply be two pieces of polystyrence cut with a hot wire cutter an painted the same shade of green as the paper.

The bridge will probably be foamcore and card, painted to simulate stone.

For trees I have a few Merit items. From the same purchase I also have a few fence-lengths and a couple of hedges that will mark the edges of the plough and the farm-yard.

I'll mark the fordable area of the river with brown paper to represent the muddy bank.
Posted by Bloggerator at 8:33 PM 2 comments:

Some Organisational notes for Blasthof.

My "standard" regiments consist of 43 figures.

What's the problem? I hear you cry.

All of my grenadier companies are manned by grenadiers in their distinctive headware.

Even for the 32 figure unit, I am going to pull up short by a half-dozen figures when it comes to organising them*. Time to get painting again!

I'm sure I have some RSM 95 castings floating about somewhere.

*Fortunately they are singly-based, so re-arranging my units won't cause any major headaches.
Posted by Bloggerator at 5:16 PM 4 comments: 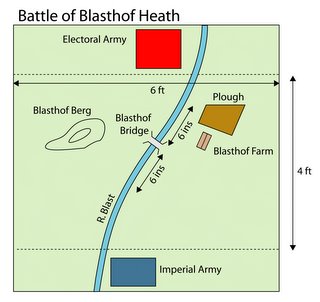 Posted by Bloggerator at 4:47 PM No comments:

For those of us who may not have the book:

The Move consists of five phases:

i. The gun must be manned by at least 4 soldiers. The target must be visible from the gun and not more than 45° left or right of the direction in which the gun is pointing. The path of the shell or round-shot must not be closer than one inch to any other troops of the same army.

ii. If these conditions are met, measure range to target, then throw dice:

Range to Target&Dice Score to Hit

i. Target must be visible to firer, not more than 45° to right or left, and lines of fire must not pass closer than one inch to own side.

ii. Long range (3” to 6”) - throw one dice per 8 infantrymen capable of firing. The number on each dice is halved for the standard number of casualties.

iii. Short range (0 to 3”) - throw one dice per eight infantrymen as above, but the number on each dice is the standard number of casualties.

iv. A dice can be thrown for not less than 4 infantrymen. The number on the dice is then halved, and should be halved again if the fire is at long range.

v. Infantry receiving fire can count their casualties when returning that particular fire, casualties must then be immediately removed.

i. If a gun crew is the target, a 6 on the dice destroys the gun. Otherwise the man behind the gun is No. 1 and you continue counting clockwise until all casualties have been removed. Guns can only be destroyed by fire from an opposing gun.

If more than half the original number of soldiers in an army have been removed from the board as casualties, that army has been defeated and can fight no more.

Posted by Bloggerator at 9:42 AM No comments:

The Red force has:
A General with an ADC;
12 Dragoons;
An Officer of Dragoons
40 Infantry;
Three Officers of Infantry;
2 Guns;
10 Gunners and;
An Officer of Artillery.
Posted by Bloggerator at 11:52 AM 2 comments: 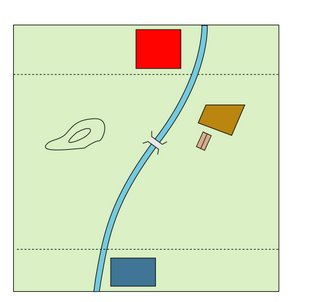 Brownie Points to anyone who can guess which battle was once fought out over this map.
Posted by Bloggerator at 10:31 PM 4 comments:

I just ordered about 10 sample Holger Ericsson cavalry from Peter Johnstone of Spencer Smith miniatures in the UK.

I am inspired to do some of these HUGE cavalry units. I may have to re-read "Charge!" again.
Posted by Bloggerator at 6:55 PM No comments:

The first issue comes out on 14 March. With names like Charles S Grant, Don Featherstone, Stuart Asquith, Bill Protz, James Purky and Mike Siggins himself writing for Battlegames quality is bound to be high.

Go to the Battlegames site and get yourself a subscription.

A Little Light on the Dark Ages of the Duchy

Some time ago (either in the Hyborean Age or somewhere around AD500) the Duchy of Alzheim entered a Dark Age. ..

In those days there were oceans of light and cities in the skies and wild flying beasts of bronze. There were herds of crimson cattle that roared and were taller than castles. There were shrill, viridian things that haunted bleak rivers.

It was a rich time and a dark time. *

It was a time when hard-riding men drove their steeds over the grassy plateaux of the Marches of Alzheim and strove to defend it's borders and towering fortresses. These were evil days when the Riders of Alzheim contemplated their own overthrow at the hands of an implacable hate.

This was a time when strange beings stirred in the darkest and most ancient of the forests. A time when a nameless evil walked the land by night and summonned all manner of foulness from the lowlands.

*A time for profound apologies to Mr Moorcock.
Posted by Bloggerator at 6:48 PM 2 comments: 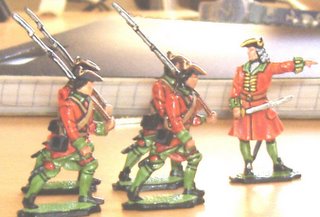 This way to the car-park, lads.
Posted by Bloggerator at 9:57 AM No comments:

Alright... maybe tomorrow (walks off muttering...)
Posted by Bloggerator at 7:19 AM No comments:

I'll be batch painting four Saxon Infantry tonight - Pictures to follow this evening. I'll let you know how I go...
Posted by Bloggerator at 11:20 AM No comments:

On the Old School Yahoo Group last week there was a discussion of an Old School Author's rules and their seeming over-indulgence in the officer class. This got me thinking.

What on earth would you do with all these fellows?

Here's what I came up with:

* a unit with less than a certain number of officers and NCOs is
obviously unable to adequately supervise the men. Should the Regiment
fall below this figure then it will lose men (deserted, sexually
harassing a barmaid, skiving off for a fag &c) equal to the number of
missing officers per move.

* the gilded staff. Every brigade needs a Brigadier and a couple of
ADCs or messengers. Every Brigadier needs a General to report to. The
general needs a staff and ADCs/messengers. The General needs a
squadron of fancifully-dressed cavalry as a bodyguard. Use the
messengers and ADCs to transmit orders from the general. Units
without fresh orders must conform to the last instruction they were
given...

Failing that, give them to me. I can make a home for them.
Posted by Bloggerator at 10:55 AM No comments: