Thanks for being patient. And Ducal doings aren't what you think. That's between Friedrich Augustus and Bauer.

I've been fairly busy this past week with work and overtime and haven't really had the time to post much here.

I have been doing a little work on the Strudelberg project. I finished the first Bavarian house a couple of days ago. I have painted up a couple more Croats of the Szluin Regiment, so have had to perform a little hat-surgery upon them.

Speaking of surgery, I have been slicing around an Austrian infantry officer with the aim of turning him into a Bavarian grenadier officer, complete with fusil and belly-pouch - I think the French used to call the equivalent item in their army a "gargoussier". I have an NCO lined up for similar surgery, although I think he will keep his pole-arm. This officer figure, once he has had his "Spanish Reed" cut away would also make a dandy ensign with a little arm-bending.

Anyway, that's enough for now. I'll post a few pictures tomorrow for the sake of a little eye-candy.
Posted by Bloggerator at 7:54 PM No comments:

In between writing another Battlegames review for Eureka (or is that the other way around?) I've been quietly adding to my Croats - I'm up to 26 now (including a standard-bearer) with another couple to be added in the next day or so - these will be Sluiz and so will need the "hat-swap" surgery to do them, so they take a little longer than the regulars.

After that, I'll be out of Croat castings and will be waiting on my next shipment of a dozen from DPC, so I think I'll round out next week painting some more Hungarians to build up Regiment Haller.

This weekend I'll be raiding the model railway shop for some "Bavarian-looking" buildings. Painting them ought to be a nice break from painting miniatures.
Posted by Bloggerator at 1:49 PM No comments: 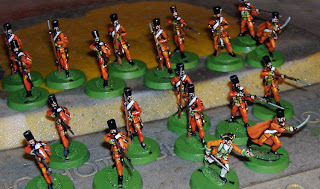 Captain Kalnocky leads his reinforced company into action across the top of my spray-paint spattered recycling bin. To him it is a field of Mars. To his Carlstadters from the Likaner Regiment it's just another fight.
I just finished painting Captain Kalnocky this evening, promptly dropped him on a concrete path, curses, re-touched and varnished him then got him together with all the lads if the first company and a few of the second for a group photo.
They refused to pose with the fisrt recruits to the Szluin Regiment of the Karlstadt Generalcy. They look too much like Germans to them.
Posted by Bloggerator at 8:29 PM 3 comments:

More on the Defense of Strudelberg Croats

I just sent off an order to DPC for another dozen Croats which ought to finish off the second company and help the third get well on its' way. I also will be welcoming a dozen galloping Austrian Dragoon castings to recruit into my Bavarian forces. Additionally, I ordered a few Ottoman Turks who I think look promising as "early Croats" - I'm fairly excited about these and really hope they'll live up to my expectations.

Next, I'm hoping to convert a couple of the dragoons into drummers using the seperate drums it's possible to buy from Castaway Arts. How did these guys steer their horsies, anyway? Did they tie their reins to the stirrups or something? Anyway, expect me to beplaying with knives, files, greenstuff and brass wire soonish...

I'll get a picture of the completed company up tonight or tomorrow morning.

On another note, me and the missus have finally (after saving for about three years) booked a European Holiday. Mmmm. Six weeks, and only two of it tied into a tour (OK, Berlin, Dresden, Munich, Prague, Budapest, Vienna - it's like the Austro-Hungarian Empire Tour...) so I'm free-ish for four weeks.

Who's got suggestions on places to be and things to do from a geeky perspective?
Posted by Bloggerator at 5:23 PM 2 comments:

Just quitely noodling away here on the idea of the Defense of Strudelberg and I'm thinking about the composition of my Croat forces.

I like the idea of creating a company of "early" Croats using some of the figures from the RSM Ottoman range - I've spotted a couple of chaps in tall hats and baggy pants wearing shirts and loose waistcoats who might suit. I even like the guy with the horsetail standard who I could swap with a more "Austrian" standard-bearer.

It might even be possible to get some of these blokes into flugelmutzen (perhaps casting my own) to create something approximating von Trencks' infamous freikorps.

In the meantime, I'm nearly done on my first Croat company and have made some progress on companies two and three. My next order to DPC will get these latter companies close to completion, buy me some Austrian Dragoons (who will go nicely with some old von Kleist Cavalry as horse-grenadiers, I think) and some samples for my Balkan wild men.
Posted by Bloggerator at 9:22 PM No comments: