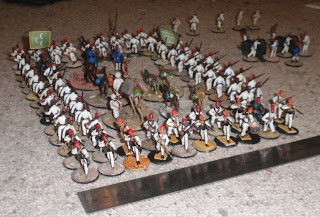 Today (instead of actually having a game - rolls eyes!) I thought I might take the time to see how much table (or floor) space a TSaTF battalion might take up.

This is four units, each of 20 figures. Artillery outside the square with a few skirmishers out to screen the crews. 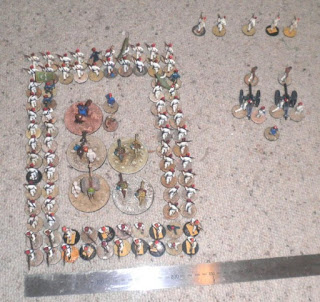 The ruler is scaled in centimetres.

The bases of pack animals gives an idea of the effect I want to acheive.

Now I just need to fix the basing up!

Additionally, I've re-read my Snook and gleaned the following figures for the Khartoum
Garrison:

As of the 22nd of November, Gordon had the following troops in the garrison:

1421 Egyptian Regulars
2316 Sudanese regulars
1906 Bashi Buzuks
2330 Sha'iq'a Irregulars
692 Armed Citizens
Additionally, there were 12 guns on the lines, another 11 in the steamers as
well as 2 Krupp 20-pounders. Gordon states in his journals he had 2-3 "French
Mitrailleuses".

To that date also, Gordon notes the garrison has suffered 1800-1900 fatal
casualties. 800 of those are from the Sudanese troops. At the start of the seige
then, the garrison of Khartoum is in the region of about 10,500 men.

Note that most of the Egyptians are either at Fort Omdurman or on the steamers.

As to breaking them down for wargaming purposes, I've chosen a scale of 40:1 and
distributed the remaining 1,100 casualties roughly proportionately, thus:

I need to check a little firther to see what proportion of the Bashi Buzuks may
have been mounted, if only to see how far their mounts might be used to eke out
the food supply...

This gives us a total of 260 figures which, if you multiply it back out, comes
to 10,400. So not too bad an approximation of the garrison.

At the same ratio, we'd need to find a maximum of 1200 Mahdists (equating to
50,000 of the Mahdi's army) at their peak strength. This number might be
expected to reduce as fort garrisons are detatched.

Any thoughts or comments?
Posted by Bloggerator at 2:02 PM 3 comments:

It's been more or less decided. We are heading off for the Soodan.

I am am member of a loose group of gamers and megalomaniacs who get together twice a year at CanCon and now WinterCon to put on a massive wargame of one sort or another.

We did a large 55 Days game at WinterCon this year and will follow up with it's big brother at CanCon over the Australia Day long weekend.

Next year's CanCon will be set in the Sudan and it looks (not to put too fine a point on it) MASSIVE.

Ideas being kicked around are a three-days' long campaign involving:

At the moment, all's to play for but my money's on the "all three" option.

So the preliminary work involves looking at the historical orbats and then juggling figure numbers to get appropriate unit sizes - if you want bit briish Units, you need 4-8 times as many Mahdists and we are wanting 200 or more British and a similar number of Egyptians in Khartoum! 1500 or more Mahdists might do it. Even with some Gilderesque tricks, that's still a formidable number of troops. Oddly though, if enough of us pitch in, our existing collections will take us most of the way there (especially for the British) and well, there are always the Perry Mahdists in plastic...

Then there is the planning. How are we going to put on the game? What sort of game will it be? For myself, I'd like to see a co-operative game with the players all on the one side (which one :^)) with the Mahdists either run by the Umpire or (another Gilder touch) some species of reaction table. Then there are the rules - probably home-baked and based on the 55 Days ruleset we've written. And the terrain...

Where's MS Project when you need it?

Huzzah for the Hussars

Wot I did this week gone by.

Horses and riders by Conoisseur - almost mandatory when one rides forth into the Sudan. Bases by Litko.

With regard to my painting, this was mostly acrylic with ink washes on a white undercoat. Paints for the most part GW and Vallejo. The khaki was, I think, Lifecolour. There's a little lining in here and there (helmets, edges of belts and so on) in a very dark brown. this looks better than black on this sort of palette of colours to my eye.

Next I'll be working on some more Egyptian Infantry and then we'll get stuck into those 21st Lancers.
Posted by Bloggerator at 6:52 AM 2 comments:

Not much to report this week, just the seven figures in the pictures. They are Castaway Arts from the "Colonial Egyptian" range.
Excellent figures these, very nice anatomy and meticulously researched. All I could hope for would be a little more variety in the posing of the campaign dress infantry and perhaps a few head variants for the more regularly-dressed chaps to reflect the variety that seems to have been in use in the field. Still, that ought not be beyond the skills of the average modeller with a dab of greenstuff.

The figures themselves are beautifully easy to paint. I just spray them with Rrmy Painter Bleached Bone, ink-wash then then dry-brush up to pure white. Jobs done!

Now, Gerry, how about some gunners?
Posted by Bloggerator at 8:09 AM No comments: 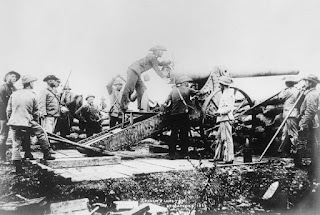 Posted by Bloggerator at 8:22 AM 7 comments:

PS Glen Moray's decks taking shape with a lamination of balsa over the foamcore basis structure.

I've scribed the planking in with a black biro and started assembling the desk-houses. Ii'm debating whether to add some decorative pillars to support the upper deck. What I'm really doing is putting off trying to build the paddle-wheel houses.

I like how the funnel turned out. I'll eventually guy it up as was done with the real thing.
Posted by Bloggerator at 9:37 PM 2 comments:

I dunno, what do you reckon?
I'm thinking, PS Foamcore, PS Conrad. PS Glen Moray. Something like that. Next up, balsa-cladding the decks and plank scribing.
Posted by Bloggerator at 9:41 PM 3 comments:


I stop, my glass half-raised to my lips.

Surely not. It is! Oh, they've come! Hurrah for the Highlanders and Hurrah! for the Glen Moray!
Posted by Bloggerator at 8:54 AM 1 comment:

Evening is drawing down.

The screw gun and it's crew are ready, at last. It may be just in time; in truth it's all we have for now.

Just beyond the range of our fire the enemy flit, black shadows in the dusky gloom. Would that more of the Highlanders were ready, but there was just not the time. Still if we hold out tonight, there may be hope for the morning.

We must hold to our courage and the Glen Moray.

LATER YET STILL: ...and the sound of a steamer?
Posted by Bloggerator at 6:32 PM No comments:

Going forth again - Into the Sudan

Outside the rain beats down, drops snaking unhurried down the pane. It has been a long and wet winter this time around.

I shudder at the sudden chill and reach for the tumbler of Glen Moray and water beside me. It warms me a little, the rich, oily aroma seems everywhere.

Can I do this again? I look to Snook for inspiration, but all I see is him cocking one at Gladstone over 130 years' distance in time and an infinity in understanding.

Featherstone then, and Barthorp. Connoisseur, Willie and a touch of Stadden where I can for the horseflesh. Yes. The old boys will do it. The old gang.

I am stirred a little. There are those old Connoisseur Highlanders in a box somewhere. I think I know where.

Like the waves, I advance a little more with each attempt. 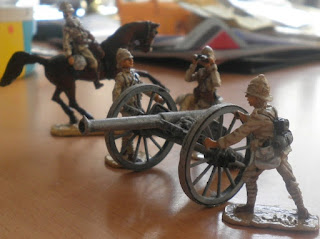