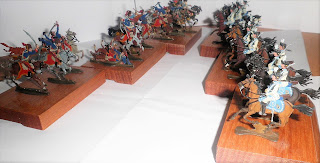 I've recently been playing around with an idea for a war game inspired by Harry Pearson's article in MW after the change in management.

As you can see, I've been trawling about on German eBay for flats.

I'm not getting too hung up on figure ratios and all that sort of thing. As far as I am concerned, one stand is a squadron, battalion or battery. To my eye about four cavalry look good, as do a dozen infantry or a single gun.

Things are not too far along at the moment; I'm really just playing around with the aesthetics of the thing. That said, I envisage using mini dice to record combat attrition. I also envision using written orders that may be deviated from through the expenditure of initiative tokens. Different armies might have different numbers of them to expend per turn. I would expect the Prussians to have more than the Austrians who, in their turn might have more than the French.

Any feedback would be highly valued.

Posted by Bloggerator at 9:10 PM 9 comments: 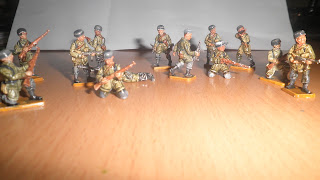 I have a deal with my nephew. 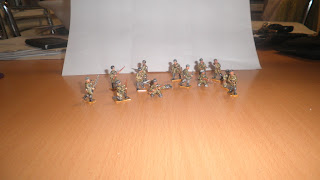 I give him figures. He assembles them. I paint them and hand them back.

Here's the latest batch. Rather enjoyable to paint in the old wash and line technique. But I should have painted their chin-straps... And I wish they had more riflemen options and replaced at least some of the MG42s with MG34s
Posted by Bloggerator at 8:39 AM No comments: