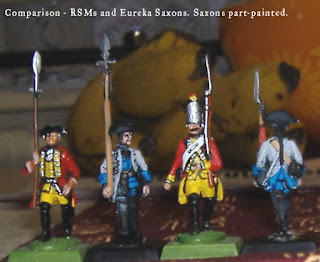 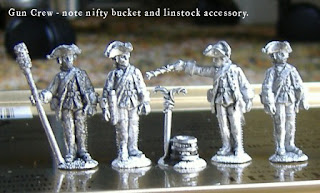 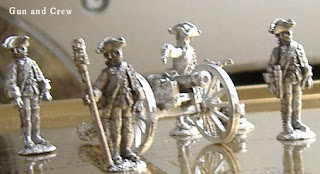 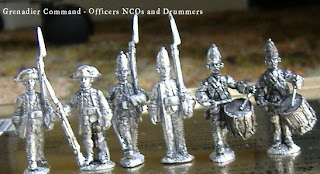 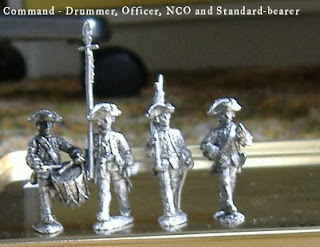 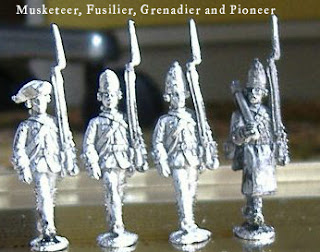 Ordinarily I'd pop this one on "Rants Raves and Reviews", but this is just a sneak peek for now.

I ordered a fairly huge number of Eurekas' 100 Club Saxons.

Basically I ordered Musketeers, Grenadiers and some Fusiliers with which to make up the von Rochow Fusiliers. I ordered some other bits and pieces, more on which later. I left off ordering the Leibgrenadier Garde figures because I couldn't afford them and also because my RSMs were filling that role quite nicely. I may order some later.

Initial impressions are good. Excellent sculpting as ever, fine finish to the miniatures, no mis-casts, some difficult castings were pulled off with characteristic aplomb. I ordered way too many of everything as usual and find myself with enough lead to build four and a half battalions of Musketeers, a battalion of Fusilieers and one of Grenadiers. Each troop type comes with Officers, NCOs and Drummers appropriate for their arm. The Musketeers and Fusilieers include standard-bearers; the grenadiers do not as they were the converged companies of several different regiments and as such did not bear colours. Great faces on the figures too, who seem to be marching along with every evidence of zesty panache.

One small quibble here is that half the command figures are marching along in poses similar to the private soldiers, while the other half are at the halt, standing at attention as though accompanied by an as yet non-existent firing line. This kind of makes fully half the command figures I was supplied with look pretty odd. What are they doing? Directing traffic?

The best thing about this range is it's completeness. There are extras over and beyond the normal 100 Club ofering; Eureka have really pulled out all the stops here it seems to me. There is a mounted General, there are mounted regimental Officers; afoot there is a pioneer, complete with axe and leathern apron. Did I mention the oboist and hautbois? They are there. There are gunners for the battalion guns, albeit in somewhat static poses.

Did I mention the battalion guns? It seems to me that Eureka are offering the light artillery left over from their old "Countess Sandra" 7YW Amazons as battalion guns. They fit the bill well enought it seems to me. Nicely cast little weapons they are too.

Now I come to the problem that I perceive with the range. I have to make a rather large confession here: I assisted the commisioning party with some of the uniform research. As I understood it, the range was to be of Saxons of the Seven Years War. The army that was reconstituted after the Saxon army was impressed by the Prussians after Pirna in 1756. To that end I provided my materials which convinced me that the Saxon Army of the time wore collars on their coats.

I can see my girlfriend rolling her eyes at this point, but bear with me, I'm anally retentive on these things.

The Eureka castings do not have collars on their little coats. Nor are there lapels visible on their waistcoats. To me this does not read as the Saxon Army of the 7YW, but rather of the 1742-45 period of the War of the Austrian Succession. My Stephen Manley booklet and my book on the Saxon Army by Wolfgang Friedrich suggests to me that the Saxons of the time were adopting a collarless, unlapelled coat. My Sapherson, Pengel&Hurt and (again) Wolfgang Friedrich lead me to believe that a collared coat was worn in the Seven Years' War.

I ought to note that Richard Knotel disagrees and is with Eureka on this one! Who am I to argue? I do think that there ought to have been made some attempt to reconcile the different indications provided by the sources.

It does I suppose highlight a problem that Eureka have with these 100 Club projects. They have to rely on the research of the people proposing the projects. They've been caught short before with their AWI Marbleheaders, I seem to remember, which is a pity.*

I'm not sure what the solution is, perhaps Eureka need to do some independent research on the projects their commisioning parties put forward, perhaps.

All this being said, I recommend these figures most heartily, especially if you are - as I am - rather more interested in the War of the Austrian Succession than the duller Seven Years' War!

If you do take them as being of the WAS, then please do remember that the Fusilieer castings will serve as Grenadiers in the earliest part of the conflict.

*They were missing pikemen and African-American soldiers, I believe. "Caught short" is a bit harsh. Rather say they've been let down in the past by the standard of research by some of those comissioning some of their 100 Club projects.

Since you'd rather have WAS figures anyway, just smile and be happy that these castings are right for that conflict.

Besides we can always "add with paint" if we really feel the need to do so.

Sure and that's fine for me Jeff, but I wonder whether Eureka will be marketing them as WAS or 7YW?

One of these days I'm going to have to try some Eureka minis and see how they look alongside my Foundry minis.

I say "go get 'em", although they may be a little slimmer than Foundry - no bad thing as far as I'm concerned!

Very interesting review of the new Eureka figures. By and large, they sound enticing. Might you post a photo or two of said miniatures? You know, vicarious enjoyment for your Duchy of Alzheim visitors around the world and all that. ;-)

Good morning Stokes (well, it's morning here...), By and larege they are rather enticing. I'm intending to post some pictures this weekend.

They'd make excellent figures for an imaginary German statelet, too, it strikes me.

Greg,
How do they match up with RSM? Are they compatible in height?They look pretty good to me - much better anatomically than most of the cartoons produced these days. I'm tempted...

While I'd not mix them in a unit, I'd certainly put them together in a brigade.

To my eye, they are like much a more refined "Sash and Sabre" casting, if you're familiar with that company's products.

I would also be interested in seeing a few side-by-side pictures of these with similar RSM figures.

Excellent review. I bought a couple of these as I wanted to see whether they could be used as AWI German troops - there are a couple of Brunswick units the uniforms are correct for. It's very good to see pics of ther rest of the range.

I need real candor in the answering of my two questions.

How do these figures compare in scale and detial with Front rank and Foundry figures?

I bought about 20 of Frank Minden's figures and they were too thin and smallish for my tastes.

Are these figures closer to Front Rank or are they closer to Minden figures?

Thanks for your help.

Well, Chris, in the first photo, the comparison shot, you'll see they are compared with some RSM prissians. The RSM Prussians are similar to the Mindens in their proportions.

I would say that the Eurekas are somewhat more in the direction of Front Rank, but not terribly close. I'd say they are closer to the RSM end of the spectrum.