Mucking about with Paintbrush and Camera 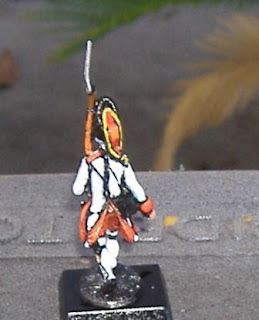 This week more than anything else, I'm doing the toy soldier equivalent of doodling and painting little bits of this and that. I'm really enjoying painting a couple of Austrian Grenadiers from some descriptions on a Morier painting or two in the Osprey on Maria Theresa's Infantry for the 1740-48 period. This could be the start of something.
He's also a bit of an homage to Stokes Schwartz's outstanding work on his own 80-figure infantry batallion. Phew! 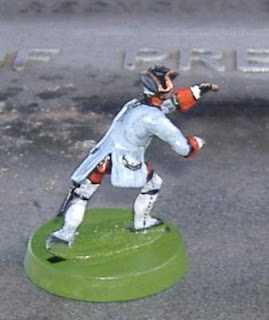 French Ouvrier. I intend to equip him with a mattock or pick to make the most of the pose. He may even find himself engaged in heaving on a rope or rolling something. The pose seems quite versatile to me. I also like the idea of using him as an infantrymen drafted into assisting with a regiments' batallion guns. The possibilities are quite appealing. 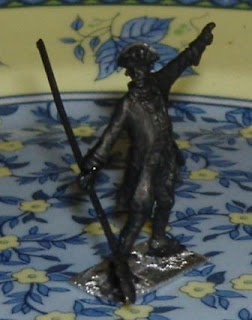 This is my own choice for best wargaming figure ever. He's a lovely little 30mm Stadden Prussian. Can't you just see him urging the men on as they storm the Churchyard at Leuthen?
What's your favourite?

Posted by Bloggerator at 7:35 AM

Judging from the style, I'm going to say the Grenadier and Ouvrier are RSM95s, aren't they? Having typed that, I'm now thoroughly frightened by the idea that I might be recognizing a figure by sculpting style. Isn't that something only those OLD gamers do? ;)

Yes, you are absolutely correct on BOTH counts!

The Stadden Prussian (bottom figure) appears to be dancing with a broom al Fred Astaire.