As you may have guessed, these past few weeks a young man's fancy has turned to the Crusades. I've been poking around for bargains and the Black Tree Design 2nd Crusade range with it's regular 35% discounts led me to buy a unit pack of 20 foot knights which i finished painting last night. I'm only posting some pictures tonight because I had no batteries for the digital camera!

I decided to base them two-by-two on 40mm square bases because I had a surplus of them. I normally prefer my figures singly-based and will revert to tht scheme as I go on. This has been a bit of an experiment that I may repeat later on, depending on how I feel about these with more mature reflection.
Since I bought these, I have also purchased an army deal that will net me a dozen archers, a dozen cross-bows, 9 knightly cavalry, a dozen light cavalry (which I shall treat as sergeants), two dozen armoured and armoured spearmen as well as a couple of dozen axemen. That should get me a pretty respectable army. All I'll need will be an army commander (from the Perry brothers), some Turcopoles (the Perrys again) and perhaps some allied light cavalry - I'm thinking of some eBob Mongols standing in for Petchenegs or summat - especially lovely-looking figures. Maybe even another dozen eBob Archers, too.
We'll see. 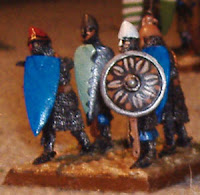 I found that I had a couple of circular shields floating about that I determined to paint in a sort of floreate pattern per what I'd seen on the Perry miniatures websites' images of their Turcopoles and moslem figures. I wanted my army to represent the secular barons of the Kingdom of Jerusalem in the years up to the fall of Edessa in 1144, before the Second Crusade. To this end I thought to let a little Islamic style seep in.
I'm rather pleased with how this shield turned out, hence the extreme close-up!

Note the purple-yellow-purple and the stripey green-and-white shields. Every medieval army I've ever painted (Bretonnians, Agincourt and now Crusades) has had a couple of knights in this livery. It's become a tradition now! I may have to come up with a story for these two knightly families. Let's see now, Odo Lecornu and Fulk Ibein. Or something like that.

A view down the battle line.

Posted by Bloggerator at 9:29 PM

They look very nice - will you be doing their opponents as well?? What rules will you use - WAB?

What a nice diversion! I really like these, especially the shields. Well done!

Hi Steve, Yes, I'd say I'll be using WAB and I suppose I'll have to create some Fatimids or Byzantines or something. The best thing about the period is the ability to mix'n'match.

Have you seen the eBob Mongols? Although fairly pricey, they are FANTASTIC-looking and might do nicely for nomadic light cavalry.

I think the Beyond the Golden Gate supplement ought to provide an appropriate list.

Stokes, thanks for the kind words. I must try to track down some transfers to jazz them up a bit more.

Excellent job on the floral shield!

Having just read the first two books in the Templar trilogy by Robyn Young, I too have a hankering to go on Crusade.