Still experimenting... or am I? 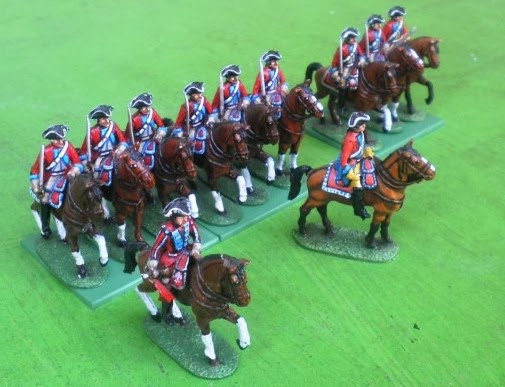 This represents the current state of affairs. I am going to call a this a squadron and a half of the "la Reine" cavalry regiment. I think that three squadrons, each of six figures plus a couple of "command" will do for a regiment.

I spent a couple of hours re-basing the 44th Foot to the new infantry standard on the weekend. Three "companies" of twelve figures will make up a regiment/battalion. I have decided to add a command figure per company, either an officer or a drummer, with perhaps an additional one attached to the centre company. There will be one or two standard bearers and a mounted officer to round things out. 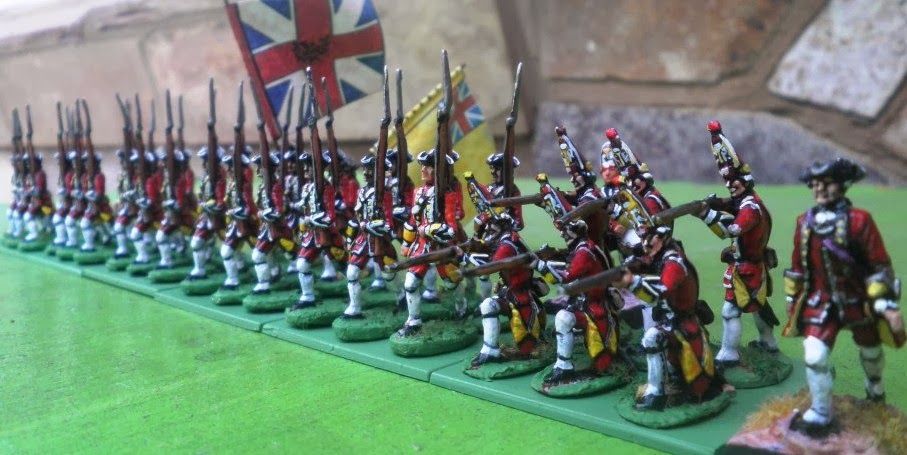 I still need to put in a bit of effort sorting out the 44th (primarily a mounted officer), but I think I am getting there.
Posted by Bloggerator at 7:20 PM

Lovely lads as usual Greg.
Most French cavalry regiments had two squadrons, including La Reine in 1757. This only matters if you want it to matter. Otherwise it doesn't.
Bonne Chance,
Bill P.

Your army is looking very good Greg. I hope that you stay focused on getting enough units for both sides so that you can actually game with them. I've always liked RSM figures.

Hi Bill - that simplifies everything for the French then... and I have rather a lot of them, too! I'll be sticking with three squadrons for the British Dragoons at Prestonpans howver.

Well Jim, that's the aim. I think I ought to get there for the Prestonpans project by about the end of April. I have a few Prussians to paint up as Saxons to clear my desk, then I'm going to make a start on some Jacobites. The RSM Jacobites are quite attractive; I just need a pot of tartan-coloured paint.

My last pot of tartan paint dried up, its been so long. Just remember the aim is to fool the eye not reproduce the sett precisely and desite appearances, its all lines not squares. Thin or translucent paint will give the best effect.

Ross, I'll be taking a leaf from Mr Preeces' book and going for contrast.

A perfectly valid artistic choice. I find that in life, highland games etc the setts disappear at a few yards difference. Of my 2 kilts the Black Watch one just looks like a very dark , almost black greeny-blue from across the room. Thats why Britain's could get away with their toy versions.

I look forward to seeing what you come up with. They'll be worthy opponents for your redcoats I'm sure.

With the Government Sett, I can see why that happens - two tonally very similar colours and almost no contrast. May as well just paint them in a dark "blueish" green and have done with it!

I paint them dark blue, then add green window panes and everywhere the lines cross I dot them with a light green. It looks pretty good and is easy to do. The dicing on the hose is a different matter though as they seem difficult to paint, but same method. I use light red paint and paint criss crosses, then wherever lines cross, add a dot of dark red.

I do muh the same for the kilts making sure the green is narrower than the blue, about 1/3, then outline then with thin black lines uding well thinned paint. Fudging Royal Stewart and the like is harder since there are only thin stripes, too many to paint them all. The good tjing for the Jacobites is that it was pre clan tartan and simple, muted colours prevailed.

Peter Blum's Imrie Risley Model Soldier guide had a good tip I stll use. Run a thin vertical seam down the back or at least imagine it, the paint a series of spiraling pink lines around the leg at about a 45 degree angle making sure the white and pink (or light red) are equal width. Then repeat going the opposite direction. The 2nd set will hopefully cross the first set creating a diamond pattern. The intersection can then be done in red. Obviously gets harder as the figures get smaller but at least its also easier to fudge. Its also easier before spats were adopted. For Jacobites plain hose are more likely.

Are those cavalry in the first pic RSM? If so, can you tell me what code they are please?

Yes, they are RSM. I'm pretty sure they were SYWF-C5 - Standing French cavalry.

They're a nice little figure. I may need some :)

My current order to RSM has gone AWOL. As has my Minden order. Can't believe two parcels have gone astray!