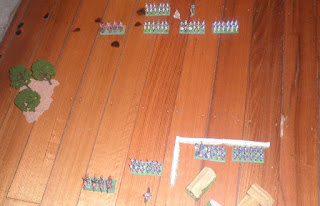 Well, I managed a small test of the rules this evening. I laid out three units of foot, one of horse and a gun per side, wavered and added another unit of foot to one army. And made it a guards unit. In for a penny, in for a pound.

The scenario involved an attack on a village. The weaker side was defending with two units and a gun lining a wall at the perimeter with the third staggered back a move outside to the flank but still in communication with the garrison. The cavalry were staggered further back again. The attackers came on, three units of foot abreast, the fourth tucked behind that on the right flank. Their cavalry faced that of the enemy although neither side really wanted to plunge in.

The attackers declared a charge after two moves of steady advance. Steady artillery fire had removed a pip from one of the enemy units in the village and it was this that the Guards (who were also a little depleted in their pip store) attacked, driving it back from the wall and electing to follow up with another round of melee which drove  their opponents from the field. Their comrades had likewise been driven back, but had manfully rallied and cast their own opponents back out of the village.

The remaining units continued their advance until within musketry range, their generals joining them in order to prepare to bolster their pip store. One General lost a pip when his unit was fired on. The attackers had their fourth unit in close attendance on that which was to the fore should it need to fall back.

The rules seemed to work fairly well. I like the shooting rules, simple and fast moving. The melee was rather fun with some real ebb and flow. The Guards were tough, but now overwhelmingly so. I'd like to try a larger game with say six units of infantry per side to check the command and FBIGO rules.

So far so good.

ALSO - I thought it might be a good idea to put a copy of the rules on their own page. I'll just update that so the most current version is permanently up there.
Posted by Bloggerator at 5:49 AM

Seems to be coming along nicely.

So far so good. I need to do a larger test for a better feel.

Not sure you should encourage this cowardly hiding behind walls thing....

Couldn't see the pictures but sounds like a promising start. If Saturday goes well I'll try something on Sunday.

OK, found something I missed. What's the sequence? Igougo? Simultaneous to written intentions? Toss for initiative?

And can units move and shoot as long as they don't charge?

Only one picture - this was a rather hurriedly assembled affair.

Correct. Move and shoot or spend a pip and double move to charge.

Thanks for taking the time,