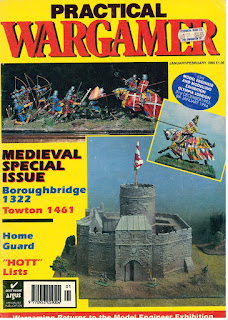 I sometimes think that with two large 18th Century armies, a large Colonial army, various WW2 forces, quite large Ancient armies and so on and so forth if my days of building huge forces of 7-800 figures a side might be drawing to a close. Obviously this is nonsense, but if it were ever to happen (and there is yet time, I am but a mere lad of 47 years) then this is one diversion for my declining years. 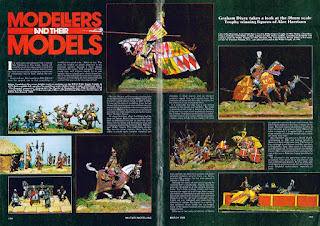 I was leafing through my old magazines over the weekend. What better way is there to pass the time these bitter cold winter nights, I ask you? Anyway, in between glasses of Shiraz, I came across these articles featuring the work of one Mr Alec Harrison of the BMSS in the March 1988 issue of Military Modelling and the inestimable Practical Wargamer of January/February 1994 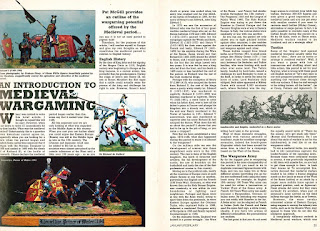 His work is utterly charming in my eyes and has the advantages of using 30mm Willie figures, all converted to one degree or another yet retaining that certain poise of the originals. It has been a fun process trying to work out the original figures and I am tempted to say that much that may have been in the original catalogue may not now be there. I am lookng especially at the Gensdarmes above, although they have since turned up again as remastered figures in the Tradition Catalogue. The wheel turns again.

I would like to try my hand at this kind of thing at some time in the no too distant future. I just need to lay in a stock of lead foil and learn how to solder.
Posted by Bloggerator at 10:52 AM

This is why it's good to have young people in the hobby, with their boundless energy and enthusiasm, willing to take on the twin challenge of heraldry and soldering without a second's hesitation. Great stuff.

I remember that article..... the grey matter not having deteriorated too much at a similar age to yourself . How about using tomato puree tube foil if lead is hard to come by....works well I believe?

It's not a problem - Verlinden do it, others too...