Not too long back, I was gifted by the very kind and generous GW a pile of Willie Franco-Prussian War figures that had come to him from Larry Brom.

This is a period I don't know a lot about, but do rather enjoy the uniforms of. That's more than enough excuse, correct? Free figures, pretty uniforms and a War with a reputation for dash and occasional atrocity.

So, off I went and plunged in with a vague idea of building a small collection that might work with Featherstone's rules as laid out in "Tackle war Games This Way". 12 figure infantry units, six figure cavalry units, a gun is a battery and so forth. Stuart Asquith wrote up a version which float about online. 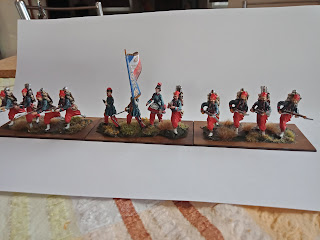 I thought it best to start with the Zouaves. Get them out of the way and everything else seems easy by comparison! 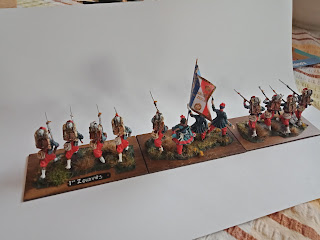 The flag is by Warflag, representing the First Regiment of Zouaves, First, Division, First Corps, Army of the Rhine under Marshal MacMahon. I agonised somewhat over the basing, thinking I might even Plinth the stands on nicely polished quarter inch timber. Then sanity prevailed and I went for Renedra treated with Acrylic oils to simulate timber grain, sealed with varnish then garnished with figures, terrain paste and a variety of tufts and static grass. 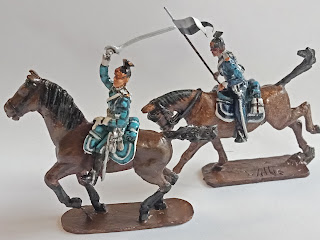 Prussian Uhlans awaiting their treatment. What gets me about the older production Willie figures was how they would arrive in the post (presumably) with their weapons soldered into their hands. Oh, how I sigh for times past. 2nd Pomeranian Uhlan Regiment Nr 9 if you want their full title! 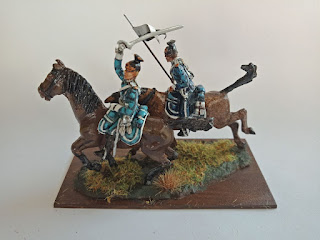 ...and based on my lunch-break.

Lovely figures, really good job on them too, the FPW is one of those conflicts that is "must" but still "to do" in my case. Looking forward to seeing more!!

Willie figures are still iconic and never bettered I think .

Donnie, thank-you very much. I agree, but will probably never do it justice as it seems to cry out to be done in 15mm at the corps level to really dig into the issues that made that war "different". But, gosh the toys are pretty and that's enough for me.

Svjek, I couldn't agree with you any more! (but I just wish Suren had made some gunners!)

Off to a grand start.

But I do miss seeing Larry at cons, chatting and occasionally rolling some dice.

Lovely figures! Sorry, I missed this posting somehow at the beginning of the month...

I'm glad you like them David. More are in the pipeline..!