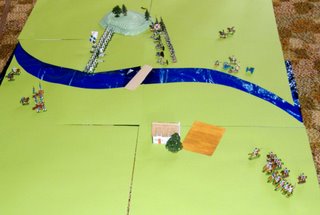 The cavalry renew their fight, von Brownes with desperation, de Saxes with casual arrogance. Remarkably they inflict only two casualties for the loss of three. This is due to Trooper Scheiss fighting a combat against two Imperial troopers and triumphing. He has been nominated for the Order of the Black Eagle (second class).

Taking heart from this Von Brownes Infantry close their files and fire. Again their Grenadiers cannot draw a line of sight and thus only 24 men may fire. They do, and inflict a miserable three casualties! Damn it! His gunners have scrambled to man the piece left by their slaughtered comrades. They fire and miss! Hell fire!

de Saxe, with a wry "alea jacta est" has his men discharge. As they have been all day, the dice gods are with him and 11 casualties are inflicted.

von Browne, finding that his force is now at 50% effectives glumly orders a retreat. The rags of his dragoons will cover the withdrawl. He has decided that when he relates the battle to His Highness he will dwell on the actions of Trooper.. no Corporal... no, Ensign Scheiss. yes, that's the stuff. This is just a tactical withdrawl. He'll never listen to Bauer again...
Posted by Bloggerator at 2:00 PM