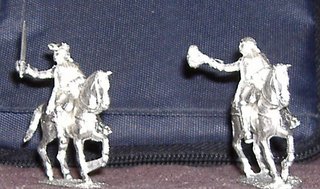 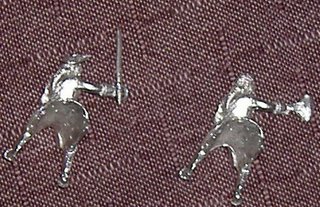 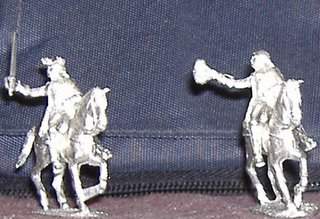 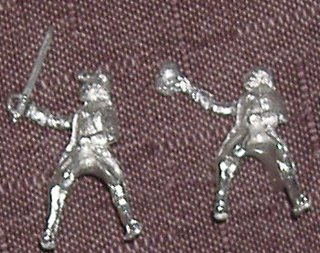 For those of you who know the figure fairly well, he's the French mounted officer who's waving his hat. I have found I have rather a surplus of this figure. As a result I decided I had little to lose by trying my hand at a little conversion.

I popped a pin into the head to later hold the hat securely in place. It was fastened with superglue. More paperclip was wound around the hilt of a sword, and supreglued as well. This was then glued into the pin-hole in the wrist. I put a dot of paint on the end of the pin in the head and transferred this to the hat (from which I had filed all trace of the hand) so I could have a reference when drilling the hole in the hat.

The pictures are of the results so far. Later this evening I'll mix up some Green Stuff and fill around the hat/wig join, make a feather edging for the hat and perhaps rebuild the cockade. Then I'll reconstruct the destroyed hand. I think he'll make a nice Cavalry Brigadier. I'll do the conversion again and replace the sword with a flagpole going from the stirrup, through the hand on up.

Posted by Bloggerator at 7:53 PM

Hello Donald - he's undercoated right now. I'll be painting over the next couple of days.