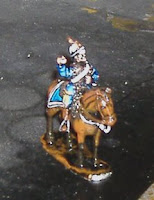 Obviouslly he still needs basing. I'm probably going to use 1mm thick plastic card in a blobby, rounded, "no shape" shape to harmonise with the coins I'm using for the Infantry.
Posted by Bloggerator at 7:23 PM