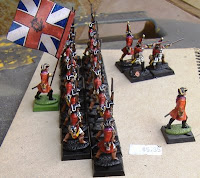 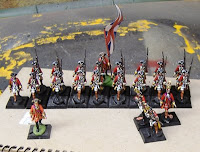 The Grenadiers are to the right. The officer is a conversion as the RSM line has no Grenadier officer.
Posted by Bloggerator at 9:31 AM

...and it's nice to have you back. I started a Niagara project perhaps 10 years ago with Rafm, Dixon and Old Glory figures but ran out of steam and never finished it...and probably never will. I trust you'll do better than me in that regard. I remember one of my stumbling blocks was a lack of attractive line infantry for either side (Rafm - too few poses, Dixon - huge heads, OG - too active and tonnes of flash)- if only Pax Britannica/RSM hadn't been off the radar back then.

You and Sir David were my inspiration to join Imagi-nations. Glad to see you posting again! Best regards...Bill

Very nice troops! I hope we can look forward to more pictures and details about your Niagara project as it progresses. :-)

Welcome back Greg! Your British look really nice so far. There's just something about a bunch of small metal men in red!

Thanks to all of you gentlemen for your kind words of encouragement.

DC - you had a Niagara project? Please expand upon your comment! What rules, scanarios, mechanisms were you considering? I'm very interested! Did you ever consider adding Fort little Niagara into your witches' brew?

All the best to us all,

As usual some loveley painted figs

Very Nice RSMs I'm a big fan and planning to branch into F&I "one of these days" using RSMs.

Well...it all began about 20 years ago when i obtained a copy of Dunnigan's book on the siege - which is essential (i think you have a copy..?). The first effort was a 15mm display game that was inspired by Niagara rather than an attempt at a faithful reproduction. Using 15mm allowed us to not only model the fort and works but also a section of lake (with watercraft), the river, cliffs, camps, and associated followers, livestock, etc. that the excellent freikorps range provides. Our rules for this and other large FIW games were published in MWAN a few years later.

The subsequent 25mm project was intended as a replay of the entire campaign at 1:10. I intended to use Bill Protz's siege rules (highly recommended) for the siege itself, and was developing a new set of rules (set at a lower level than previously) for the field actions. The plan was to reenact Belle Famille and the siege solo, and then move on to umpire a 3 player campaign where the players had free rein (within certain boundaries of plausability of course). We would use Protz's campaign rules too - with a few amendments and expansions.

Was Little Niagara the stockade on the portage? If so, then yes, i made a model of that.

I painted about 200 figures and then moved on to Maximillian in Mexico - as you do. They have sat unused at Mr 'Making Miniatures' house now for years. Writing this has created an urge to dig them out again...oh dear...

I continue to be confounded at the defeat of the French Relief Column. Perhaps it can only be explained in my mind as:

1. Blockheads in charge of the column failing to scout properly.

2. And to not deploy into line with l'compagnie franche de la Marines in the center with the milice on the flanks sooner.

They would have swept the much numerically inferior Brit. force away by outflanking them. Instead, at first, it appearss as if the column was shot to pieces as Oman might remark of French columns in Spain in the Napoleonic Wars.

There is perhaps a diagram in Dunnigan showing a French line at an odd angle. I've seen it someplace. If this line did happen, I still don't get it unless the initial volleys caused a bad morale situation and a throw of snake eyes using the morale system of Drums of War Along The Mohawk.

I've been on the spot of La Belle Famille several times. From the French perspective the Niagara Gorge is not too far from their left. To the right there would be endless forest. Forest all over the place actually except for the road and the clearing beyond the fort.

There are other mysteries in the history of battles why one side won in spite of impossible odds. This one is in the list for me.

Greg this is a very good battle to wargame as the real thing and with the above in mind. I'm sure you will find it satisfying. The thing is at 1:10 it is easy to build too! Best of luck to all concerned.