And now for something completely different

Just for a change of pace, I thought I'd get off some shots of my slowly-expanding North Africa collection that I've started work on again with a few small eBay purchases. I've had these Matildas for ages and have more in stock, which is lucky as they do not seem to be in production by airfix at the moment, although the Italeri ones seem fine to me.

I'm not really building any historical Order of Battle, just bits that take my fancy. I'm thinking these will go towards 7RTR, eventually which means I'll need at least a total of 7 if I am to fuill tout the Rapid Fire organisation.

These Vickers Lights were a very intelligent purchase on the part of Airfix of a mould that was developed by JB models some years ago. It's currently in production and a really nice little kit that builds very easily.

The faithful old Airfix Universal carrier. Such a useful kit, and it looks splendid in my rather inaccurate Caunter Camoflage. Oughtn't that blue be grey instead?

The Germans arrive. I have had these two Opel Blitzes forever; more than 15 years if you can believe that. A bit like the old Matchbox Pz 2 I have had floating around (and still intact) for donkeys' years. 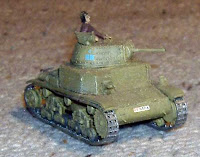 Italian M13/40 by Italeri; another old m0del I've had for years. Like some others, it is now back in production after a fair old absence and I have taken advantage of the opportunity to stock up on them; terribly useful vehicles for equipping either side!

I picked up an old Gloster Gladiator kit from Airfix last week and was delighted thay had included transfers for "Faith", "Hope" and "Charity", Maltas' legendary defenders against the early Italian assault. Put them with a few Vickers and a pair of Matildas painted in the Malta "stone wall" pattern, and you could do all sorts of things with fallschirmjaeger...
Just a thought.

Posted by Bloggerator at 3:10 PM

I'm building up some forces as a side interest - western front 1944.

I have always loved North Africa - none of that emotional baggage to haul around that you find in other theaters (ie - eastern front). I have a couple of sizeable collections of N. Africa forces in my FoW stuff.

I like getting North African sand between my toes too =) A very nice array you have, sir. The Matilda is one of my favorite tanks. It just looks 'right' to me.

Two more Matildas completed and another two under construction!