A Weekend in the Stash Pile

Late last week I was looking at my various stashes of figures as a break from painting Willies when I happened across an older GW box set that I had bought some years ago, probably from eBay. It's the "Battle for Macragge" set with a small force of Space Marines and a slightly larger one of Tyranids plus some cool terrain and objective markers.

My set was minus all the rulebooks and fluff, but the box had become a repository for all my various Space Marine bits and pieces. The humus was rich and deep and perhaps it was time to go to harvest.

It wasn't until I started painting them that I realised how cool the Tyranid plastics were and how well they'd respond to the Contrast paints I wanted to use on them. Two thumbs' up GW. I went with A green and bone combination that I will use on everything. It contrasts nicely with the orange-yellow of the groundwork which was felicitous as I chose that as a contrast to the dark blue of the Marines.

It's a Mars-like world, newly colonised, the soil rich in oxides of iron that are being trickle-mined by gen mod plants. There is no heavy industry yet and only a few millions of colonists who've only lived on this world for a couple of generations.

When the Tyranid invasion came, there were only a few millions of fighting creatures. It was never known why this was although in the aftermath, Tech savants theorised that it was a hive that was either immature or severely compromised. The planetary defense corps held it's own handily, although Marines were sent to help them finish the job.

What was not realised in the aftermath of the first campaign was that remnant forces were still extant at the Southern pole of the planet and also that Genestealers had gotten in among the Civilian population.

The Tyranid Remnanters grew in strength over time.

And when the time was right they struck in terrifying numbers. The Defense Corps and the Marines may have held them. Just.

However, then the Cultists struck from within.

The situation is dire. All fronts are collapsing. The troops are in full retreat. All they can hope to do is cover the civilians as they stream toward the evacuation transports at the spaceport, harried and desperate carrying nothing but the tiny bundles of their dearest possessions. 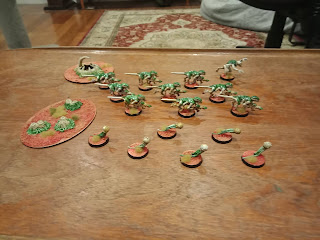 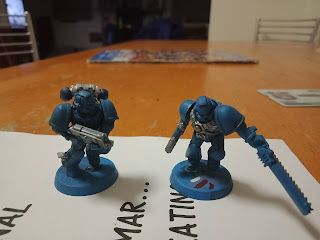 The pile of shame had quite a few disparate Marine bits, so I tried experimenting a bit with the poses. Space Marines are famously inanimate so I wanted to get them moving. I think I may be winning. 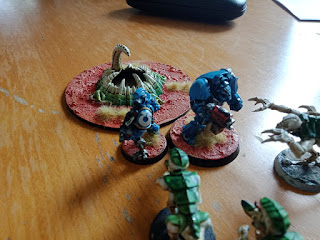 Ahem. These Marines are losing rather badly. They are troops thrown together from several companies; remnants of squads, the cooks, drivers and batmen all scraped up and put on the line. Equipment is serviceable rather than regulation often being patched together and cannibalised. These are not squeaky clean Ultramarines. These are Marines who have caught the nasty end of the stick and are reeling to keep their balance.

Posted by Bloggerator at 9:09 AM

Weirdly wonderful! And, yes. Quite a change from the usual Willies.