Prototyping Terrain for the Boer War

So, I've painted 33 Boers and a dozen British in a rush and it's time to do something else for a bit.

I have comparatively little terrain for the Boer War. This weekend, I tried an experiment to see what I could do with what I had. What you are looking at is a kind of layout I might use if the garrison of Ladyking or Himberley might have sallied out one moonless night to see what mischief they might wreak on a Boer gun position.

You're looking at one of my two 90 by 150 centimetre tables. The ridge-line or kop is made from layers of 30cm square cork tile. I faced them with grass matt paper on one side and left them in their natural state on the other. 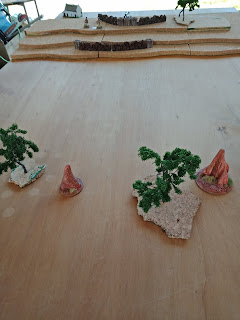 In the foreground are my imagined denizens of the bushveldt - anthills and acacia trees. The table itself is green on one side and au naturel on the other for a more arid look. I am making a few more anthills as I read so much about British troops taking cover behind them in the big battles of the war. 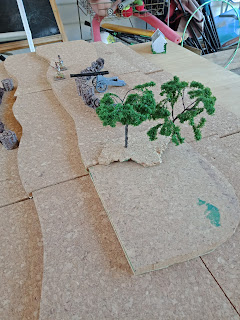 A Boer sentry stands guard while his fellows sleep in the farmhouse to the rear of the Kop. He will spot the English if he rolls a six and fire his rifle to wake his mates. 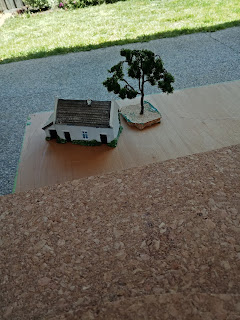 La belle Alliance standing in for a Dutchman's farmhouse; and not too badly either if the images of various Boer houses I have seen are anything like right. 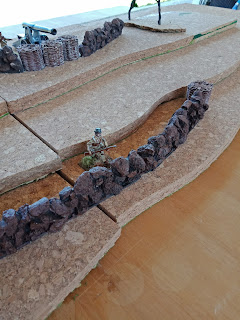 An attempt at an entrenchment with a 25mm scale resin wall and a couple of old resin Gabions. The wall lengths are about 15cm. 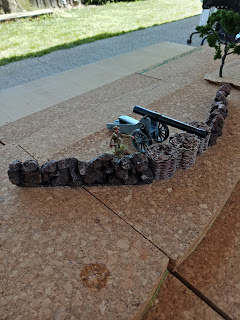 Another shot of my Long Tom in it's emplacement with a sentry by it for scale. There are improvements that could be made - the addition of the artillerists impedimenta, a firing platform and perhaps a small tent for the ammunition.
Any feedback and suggestions are more than welcome.
This particular layout I imagine as one that I would use in a mooted rule set. I see this as being a stand alone skirmish scenario to be played in the context of a larger seige. A raid is planned. Two small parties go out each with a co and with a captain in charge of the whiole show. Move by move the creep forward, dreading the moment that the Boer sentry (rolling a 6) spots them. S small squad of his comrades tumble out of their tent and start firing wildly at the Khakis in the dim, pre-dawn light. Hit chances and movement all are reduced because of the darkness. The British scramble into the Boer Sangar, desperate to set of the gun cotton charges they have brought before the rest of the Boers scramble up the Kop from the farmhouse below...

Posted by Bloggerator at 3:49 PM

A very attractive set-up there! Almost Wellsian in appearance. My only suggestion would be to set out the troops, grab some dice, and get playing. I don't recall, but have you been able to rope in the children to meeting you across the tabletop?

Indeed Stokes, I ought. Motivation to play has been lacking a bit recently...

And as for the kids, well, their own games are far more interesting than dad's drab old stuff...

Thangs Tragardmastare. Much appreciated as ever! :)