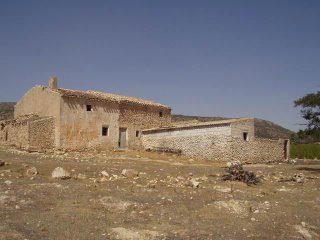 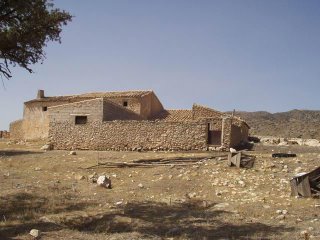 I've just about finished off my little hovel and additional walling, and am in the mood for something a little different. I have done my usual meticulous research (5 minutes googling at work) and think I might do a farm house.

The images I came away with were quite interesting, especially from this website:

It's amazing what prices are being asked for tumble-down ruins with no services whatsoever, but that's another story.

The accompanying picture looks rather interesting, and I think the farm could be built in the form of a number of boxes that could be basically butted up against each other and re-arranged to form a number of configurations. You seem to have a large house to which have been attached a number of newer buildings with the single-plane sloping roofs that then form "wings" and thus a yard which a stone wall has been built around.

Note the terrain. It's not quite the lush, verdant sward depicted in the touching History Terrain book on the Peninsular War!

I am also considering building an "L" shaped house - not as flexible perhaps as the "modular farm" but nice as eye-candy. I'm conceiving of it as being a high status house that might be at home in a town or in the country.
Posted by Bloggerator at 7:56 AM

That farm complex looks really useful. I like it.

I like the idea that I can break it down and use its' components in other layouts.

CS Forester wrote a book called "The Gun" a long time ago which had a number of actions described in it. There was one which I thought would work well with the farm filling in for a garrisoned outpost.

Yes, I vaguely remember reading "The Gun" about 35-40 years ago.

The nice thing about this "look" is that it could be anywhere in Spain, North Africa, Mexico and even parts of Central Asia.

Very useful for LOTS of different periods and conflicts.

I say "Build it and the figures will come."

Can't wait to see the finished product! Build on!!!

I have a copy of "The Gun" on my book shelf and a copy of the film in my dvd collection (Frank Sinatra is just about believable as a Spanish guerilla but Cary Grant is excellent - shame that all the French are dressed as grenadiers).
Keep up the good work Stokes. That house reminds me very much of the farm in the episode of "Sharpe's Rifles".

And a Merry Chrismas to you! And to everyone here.

The house is coming along nicely - I have most of the basic shapes cut out and have just restocked with sufficient doors and windows to get on with.

PS - Stokes is the Prince of the Grand Duchy of Stollen