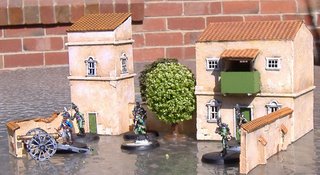 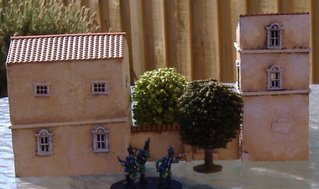 I had a few hours to myself yesterday so I went and built a few lengths of wall and the tower you can see in these pictures. Again, the materials are foam-core board and railway accessory windows. I'm out of windows! You really get through them quickly in these buildings.

I like the walling, I played around with it last night and found it's very flexible. I'll make a few more longish sections, some short ones and a gateway. I like the idea of being able to create a walled garden that I could use in the Duchy.

As ever Sean Bean's Rifles are vigilant in combing through the village and have been joined by Major Astin who is seeing to the placement of one of his precious 9-pounders. Major Astin needs a shot of varnish to finish him off.
Posted by Bloggerator at 9:32 AM

Nice buildings – I don’t know how you knock them up so fast! How do you rate the Elite figures? I have often looked at them and thought they would be the ones I’d go for if I ever tried 28mm Naps – I like their scrawny looks!

It's still early days for me and Elite, but I really enjoyed painting up my riflemen. They have a gangling, quirky look that appeals to me. They take a while longer to paint up than my 7YW figures because they are wearing full equipment, bur do reward the time put in, I feel. I need to get these based up and properly photographed.

I'd like to know how they compare to Connoisseur miniatures.

The buildings are of foamcore. Working with foamcore is a big timesaver because it's easy to work with cutting-mat, steel ruler and scalpel. The strip edging is all balsa cut from a 1mm balsa "plank" that I am slowly diminishing. The tower is 60mm wide by 40mm deep and 130mm high at it's highest point. The house is 80wx100lx115h. The walls are varying lengths, all between 30-40mm high. The trick is to put the money into the eyecatching bits - windowframes and roof tiles. All model railway accessories and comparatively expensive, but they repay the work. I'd like to get a few bits to dress the "set" with - some barrels, a fountain, a roadside shrine, that sort of thing.

The most important thing though is the texturing and painting of the bland, smooth surface of the foam-core board. I stipple on some thinned down plaster filler and then undercoat that black-brown. I work up from that to the pale golden-yellow-burnt sienna mix that I like to use. I stipple the paint on in layers to build a very low-relief subtle texture.

Personally i'd leave the walls as they are - much more useful and utilitarian.

As for elite and conniseur - two peas in a pod.

I'm not going to chop every wall around, but do take your point.

Connoisseur miniatures might help me bulk out and vary my Elites then?