Write a song - win a prize! 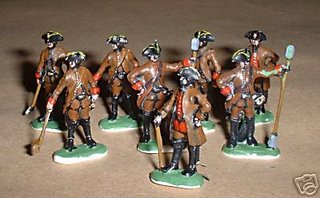 Hurry up there Bauer;
The hour it is getting late;
I am the very model of;
A petty German potentate!

Or words to that effect if you please!

This will be the national anthem of the ancient and noble Duchy of Alzheim.

Madness indeed, you might say, but His Serene Highness has deemed that it is to be so, and it was only with difficulty that he was dissuaded from offering the hand of the fair princess Mathilde to the sensitive soul who sufficiently moves His Majesty.

This competition will be open until a winner is found.

Aside from the laurel of victory and the honour of becoming the Duchy of Alzheims' poet laureate, you will also win a handsome prize! Not as handsome as the Princess Mathilde, but handsome nontheless!

Marvellous, aren't they! 1/72nd Revell Austrian artillerists, freshly and pointlessly won on eBay* by yours truly. Meister Chanticleer Schwartz, you would seem well qualified in many respects to enter this competition; nonetheless, come one, come all!

Posted by Bloggerator at 4:52 PM

Nope, I'll let some of your other wirthy blog visitors have a chance at winning these figures. ;-) But I might still have a stab at completing the national anthem for Alzheim.

I just recently came across your blog via the Battlegames website and have found it very entertaining! I'm not sure if this really qualifies for the super prize on offer but here goes anyway:

I am the very model of a modern model soldier,
Indeed we play by simple rules that make us seem much older,
We like to hear the roll of dice across the kitchen table,
And sigh about the good ole’ days as much as we are able.

We are an individual crowd, who’ve fought in many places,
And, although we march at a slowish pace, we frown on multiple bases,
We are Alzheimer’s through and through and each one knows how much we,
Heap laurels on our Sovereign King and Our beloved Duchy!

God save the King!

Do we have a winner? Only time will tell!

I'll put in my vote for Ian's contribution!

And how many of read that singing it to the tune in our heads?

Not wishing to be pushy, but I wondered if you had come to a decision yet vis the ‘write a song, win a prize’ thingy. I’m not so worried about the Austrian Artillery (although they look quite dapper on second glance!) but the post of Poet Laureate would rather suit as I may have to leave my current lodgings in Mein-Gottenburg at short notice. That is if the scurrilous rumour about myself and Princess Pretzel (daughter of our esteemed leader Prince August III) ever reach the ears of the press here. Just to show willing here are another couple of verses for you:

I am the very model of a modern metal casting,
I tread the field with crisp mould lines, in volleys I go blasting,
With simple paintwork (old school style) advance with aplomb and dash,
In tribute to our grandfathers who fought weighed down with flash.

We are an individual crowd (although we look the same),
And though our rules are single sheet we play a good fun game,
Some say we’re old fashioned but we’re just strong willed,
Fighting for our Duchy, King, and the fair Mathilde!

(ok, ok, I know it doesn’t all scan but I’m getting desperate here!)

Your servant
Captain Von Dimwitz
(Late of the 3rd Hussars)

Is the contesty thingy still going? I am working on my song, so don't close it yet!

You've until Xmas eve (local here in Alzheim time) to shoot us an entry.

Alright, I finished my little work shorter than expected:


Stand high for grand Duchy,
Fight for King, and ne’er abate!
I am the very model of,
A petty German potentate.

‘Top our mighty steeds ‘o white,
With saber’s we go slashing.
Foe run when we come to fight.
Round the field we go a-dashing!

Bombing forts with well aimed shot,
Or whiffing foe with bags of grape.
Through whole campaigns we have fought,
Though hard, we always escape.

Confident we always are,
To fight and die for Royal King.
Where fight is thick, we’re ne’er far,
Through trials we come out winning!


Note that there is a separate verse for each branch of the service: Infantry, Cavalry, and Artillery. The last verse (not chorus) is about the Army as a whole.

I hope you like it! I certainly had a fun time writing it, though I am sure I will never be a Tennyson...